I have watched people use fertilizers, both organic and human-made fertilizers, to enhance their crops. But unfortunately, some people fertilized their gardens, causing the plants to burn, grow leggy, and produce non-conforming fruits.

Fungi and the latest research… A WoW story.

The only way to determine what minerals and nutrients are missing in a soil-based garden is through soil testing. Be sure to ask for a nutrient analysis that includes the amounts and kinds of nutrients the soil needs.

Find out how to best apply the nutrient(s0, the amount of nutrient(s) to use, the application’s frequency, and how long it will take for the soil to become optimal again. This process can take months to years to bring the soil to homeostasis.

The cost of the average urban organic garden has made organic food stores so popular. However, it is cheaper to spend your time and resources purchasing the food you need to feed your family than growing your food.

Transportation costs such as a vehicle, fuel, maintenance…
Importing food hundreds of miles away from the store location, employees, insurance, operations, electricity…
Manufacture of packaging materials such as Styrofoam, plastics, paper…
Incorrect size of packaged foods for your family needs.
Food waste.
And on and on…

Forget about enjoying your family and friends because you must go to the market to get last-minute groceries. Lord help you if you went home before the store. Everyone will want to go with you, and chaos always ensues.

The book The Tuxedo Gardener has all the essential information you need to grow organic food. The food you produce using the method in the book will cost you less and give you more time to spend with your family. In addition, vine-ripened food is more nutritious than the store-bought version.

How We Mucked It Up

From the time man reduced their dependency on foraging for food and became more reliant on growing food, the soil started depleting the soil nutrients.

The nutrients have been slowly removed from the soil as we grew more and more specific food crops. A typical food crop requires certain nutrients to thrive and produce nutrient-rich food.

As a specific crop is planted repeatedly in the same site, it depletes the nutrients it requires. The result is fewer healthy and productive plants. In addition, plant diseases have resulted in crop failure.

Over Coming Our Muck?

Egyptians relied on the flooding of the Nile river to rejuvenate the soil’s nutrients. Famine became an issue when floods were late or not at all—many books and writing about the Nile flooding effect date back a few thousand years.

Europeans figured out how to recycle farm waste as soil amendments. First, they spread manure on the soil’s surface, allowing it to break down to feed the soil. They later learn to ferment the manures to improve nutrient absorption and keep diseases out of their food production.

The new world was vast, and fertile people changed locations instead of nurturing the soil. Eventually, this practice resulted in nutrient-poor soils, the dust bowl of the 1930s, and the big pharma we have today.

Today our soil is a disaster of biblical proportions. We have managed to kill off millions of microorganisms per teaspoon by tilling the soil. As a result, our water is polluted with excess NPK. We engineered crops to reduce insect damage, resulting in the creation of super-bugs with ineffective toxins.

The additional use of synthetic fertilizers, insecticides, and pesticides has doomed us to extinction unless we stop using them. Some predictions tell us we will no longer have phosphates (potash) by 2050.

At one time, the United States was the largest exporter of potash, and now we are the world’s largest importer of potash. The water is so polluted with nitrates, potassium, phosphates, pesticides, insecticides, and pollution that potable water from our underground resources will not exist.

One such symbiosis relationship is with bacteria. First, plants would release a chemical compound such as carbohydrates to stimulate a specific type of bacteria to consume an insoluble nutrient. Then, other players became involved in putting the nutrient-rich bacteria into a form the plant could absorb.

Red wigglers (decomposing worms), certain nematodes, and specialized insects would consume the bacteria. The excrement from the specific organisms condensed the nutrients. During this process, nutrients become water-soluble and are absorbed by the plant.

The roots of the plants can uptake the soluble nutrient-rich excrement. As time passed, other microorganisms evolved to support the ravenous plants.

Both plants and bacteria evolved so that the plant would absorb the bacteria and nutrients directly. Another player, fungi, proved to be an extraordinary addition to plant health and well-being in the environment.

80% to 90% of all plants create Mycorrhizal Symbiosis with ubiquitous soil-borne fungi. The fungi nutrients like nitrogen and phosphate. The fungi enhance the plant’s water uptake, growth, and disease resistance.

In return, the plant enhances fungal growth and reproduction and feeds up to 40% of its fixed carbon to the fungus.

I have used nature’s methods for over a decade to produce healthy, nutrient-rich fruits and vegetables without using human-made and organic fertilizers. 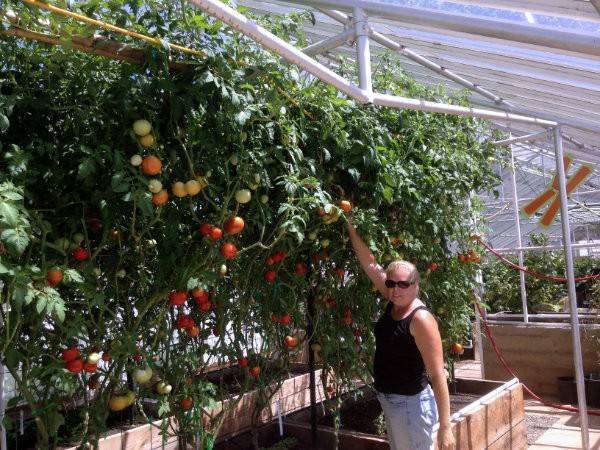 The costs of using nature’s fertilizers are minimal. Here is a link describing all the items needed and the time it takes to brew the tea.

During this time, my tomato plants have consistently grown more than 10′ high and produce vastly more than my neighbors, and I can consume. Likewise, eggplants, lettuce, peppers, root vegetables, and the like have consistently outgrown and out-produced gardens next to my raised beds.

Now Is The Time To Act

Go beyond what big pharma wants you to believe. Quit using synthetic everything. You and your family will benefit from making quality decisions about the food you consume and how it is grown.

There is a way to:

Buy and follow The Tuxedo Gardener system to learn how to use the fantastic resources at your command.